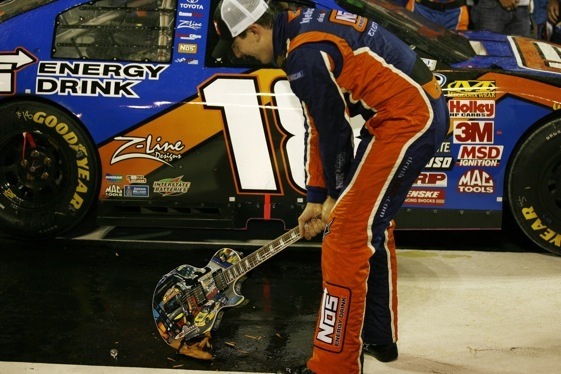 Following his win at Bristol, Kyle Busch went to Nashville to compete in a Champion Racing Association event at the Nashville Fairgrounds Speedway.  Sparks started to fly WAY before the waving of the green flag for the start of the race.

Busch told a track PR representative that it was “STUPID” to incorporate his (Busch’s) pre-race press conference with that of Chase Elliott, the 14 year old son of “Awesome Bill from Dawsonville” Elliott, and the 16 year old female driver, Johanna Long, who was to start on the pole for that race.

As the press conference began, Busch was asked if he regretted the smashing of the guitar that Sam Bass had custom crafted for the winner of that event at the other Nashville race track back in June.  “Nope”, replied Busch. “we had a great time and a lot of good has come of it.”

When asked another question about the guitar smashing, Kyle Busch snapped, “You have been told to ask only about the CRA (Champion Racing Association)”.  One of the Busch entourage heatedly confronted the reporter whom he called a“BLEEPING” idiot” for asking Busch about the guitar incident.  That same unidentified person made a slashing motion across his throat signaling Busch to end the exchange with reporters, which had become very heated!

Will he ever grow up?

AGAIN, I LOOKED IT UP SO YOU  THAT WOULDN’T HAVE TO!

2 Replies to “Kyle Steps On His Crank!”