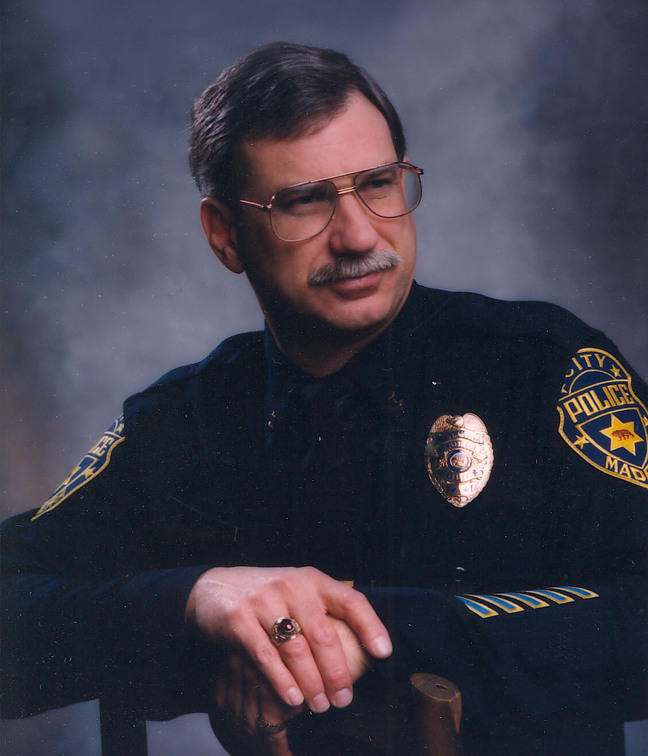 Former Madera Chief of Police Jerry Dean Noblett
It was the summer of peace, love, and harmony, the year of Woodstock, it was the end of the summer of 1969.  I had just graduated from high school and I was moving on to start my college education at my home town college, Fresno State College later renamed California State University, Fresno.
I was busy scrambling trying to enroll into my very first semester of classes.  The freshmen were all in the school gym running between the different desks trying to get into the classes that they needed.  I was no different than the rest, a young uninformed 18 year old trying desperately to get my required classes.
As the frustrations mounted I was feeling hopelessly lost.  I felt this tap on my shoulder and when I turned around it was a fellow student to my dismay.  He starting joking about this registration fiasco and we both began to laugh.  He told me his name, Jerry Noblett, and introduced me to one of his friends, Steve Detjen.  They both went to school together in Madera, CA.
As it turned out all three of us were going to be Criminology majors.  Wow, what are the chances of meeting new friends and all three were going to study Criminology?
Through the four years at Fresno State, we were like “The Three Musketeers”!  We scheduled all our classes together, had lunch together, played pinnacle together, bowled together, and played pool together.  In 1971 I got married and both Jerry and Steve were groomsmen in my wedding.  The friendship was solid.
In June of 1973 I graduated and went into the US Air Force to become a pilot.  Jerry went into law enforcement with the Madera County Sheriff Department, then on to the Madera Police Department.
Jerry spent more than 20 years with the Madera Police Department.  My buddy was a special person, it showed in the way his career unfolded and the way that he rose up through the ranks at the police department.  He ultimately rose to the position of Madera Chief of Police, quite a prestigious and honorable position.
Last month I got notification from Steve that Jerry had developed serious heart and kidney problems and was being transported to the University of San Francisco Medical facilities to await a heart transplant.  As recently as last week it looked like Jerry was going to be the recipient of a heart transplant, however that did not happen.
Monday morning I was notified by Steve Detjen that our friend, Jerry, had lost his battle with heart and kidney disease.  Jerry Dean Noblett, husband, father, grandfather, former Chief of Police, and my oldest friend, had passed from this life!
Jerry was a very humble, very honest, and very a hard working man.  I feel very proud and honored to have been able to call Jerry Dean Noblett one of my oldest, and long-time friends.
Go rest high on that mountain, Jerry, your work on Earth is done.
Farewell my friend, your legacy will always be remembered by those of us that are left here!
It was the summer of 1969!