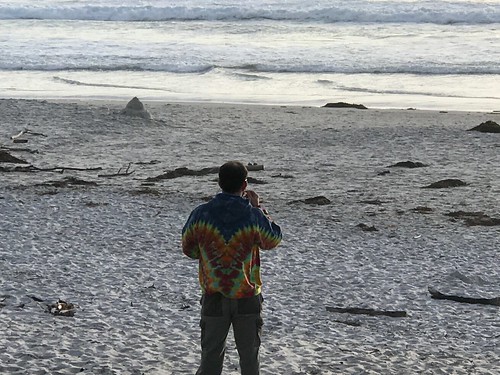 Every time that I make a trip to Fresno lately to visit with my two sons and my two grandkids, while staying with my eldest son Jason, we (Jason and I) strike off on one of his famous or infamous day trips!  This visit to Fresno was no exception to what has now become the rule.

Last Saturday we rose up early and got things together, packed up what we thought was necessary for our 2 1/2 hour drive over to Carmel-By-The-Sea for an afternoon of sightseeing.  This particular trip, Jason explained to me, would be specifically pointed towards visiting many of the art galleries that are there.

Now it is at this point that I must do some “splainin”!

First and foremost, for those that know me well know that there is not one single artistic bone located anywhere in, on, nor around the physical composition that makes up my being!  I may appreciate some art, but I am not anywhere close to being an art critique nor, an art connoisseur by any stretch of the imagination!

I may have the art or gift of gab, or as one of my dearly departed college friends, Jerry Noblett, so aptly put it back during one of our shared college classes, and I will paraphrase it for you. When he saw the A that I received for one of our essay tests in Business Law and his B, his response was something that I have never forgotten.

Jerry’s explanation was something like “Leon you are so full of BS that you just BS’ed your way into that A!  I can’t believe that we said the same thing in our essay answers, but you really greased him up with your BS!” Eureka, I think that we have a winner!

I have digressed, but I think that you get my point about my art knowledge!

Anyway, we arrived at Carmel around 10:30 am on Saturday.  By the time we found a place to park his car it was about 11 am.

As we began our stroll around Carmel-By-The-Sea our first stop was to try to find a place to eat, since breakfast was wearing very thin with both of us.  After all, it was going take a lot of calorie intact to fuel our walk around Carmel!  After a few Google searches and reading of a few menus, Jason mentioned that he knew a good little Italian restaurant, Pepe’s Little Napoli Bistro Italiano on the corner of Delores and 7th.  So we headed over to scope it out and decided this was the place for lunch.

Lunch was outstanding and very affordable for Carmel!  We each ordered up differing pizzas with an appetizer of their “World Famous” garlic bread. It all was very tasty, and I would suggest this place if you are ever in town.

When lunch  was finished we sat out on our mission of visiting as many art galleries as we could Saturday.  There was a lot of people out and about walking up and down the sidewalks of Carmel.  It couldn’t have been a more perfect afternoon, clear, sunny, and temps in the mid 60’s, HELLO!

So my tour guide, read Jason The Latent Tie Dye Hippie and All Around Edgy Dude, takes out his handy dandy cell and directs us to our first art gallery.  As we walked in and began to look around at the collection hanging on the walls of the gallery the owner/manager/curator greeted us and welcomed us into the establishment.  Within the first few sentences the question was asked, “are you an artist?”  Now this person surely must have been kidding when she asked that question!

When looking at this duo one could see an elderly gentleman, a child of the 60’s, yours truly, dressed in a pair of cargo pants, long sleeved Daytona Speedway T-Shirt and a jacket from Gold Beach, Oregon.  I must say that I was looking very nondescript, but very cool I might add, that day. I kind of blended into the nondescript, but cool, crowd!  However, standing next to me was a much younger, bearded 40-something man, who had just swapped out his Birkenstocks for a pair of hiking boots before we left his car, wearing a pair of cargo pants and a self designed and styled Tie Dye hoodie sweatshirt.

Isn’t it quite obvious who may be the artistic person and who isn’t?

So when that question was asked I would just stick my finger out and point to the bearded 40-something person with the Tie Dye hoodie accompanying me and let them know that it wasn’t me that was an artist! But to a tee, everyone of the people that we talked to in these art galleries was very friendly, courteous, and very engaging.  Many of the galleries were very interesting and entertaining for this old non-artist dude.  But there were about four or five galleries out of the thirteen that we visited Saturday that really captured my attention.

The Dr. Sues art gallery was really cool!  Charles Schultz granted a license to a gentleman that had worked with him over the years to continue with Schultz’ work.  The only stipulation was that this gentleman could not duplicate his work.  He could use all of the characters but had to use the characters differently than Shultz had done.  That gallery was cool and really brought me back to some of my youth with Linus, Lucy, Charley Brown and many, many more Shultz characters! Again, the gallery owner gave us a little history lesson on this gallery, the works that were being shown and he was very friendly, as well.

We entered another gallery that was full of paintings that were focused on the pop culture of the last 50 years.  There were many great paintings that took me back in time in this gallery.  However, there was one painting that struck me in a most unusual way.  It was kind of freaky!

As I turned the corner and entered another room in the gallery I was struck by this piece that was full of images of The Beatles.  Some likenesses from the Magical Mystery Tour album, some from the Abbey Road album and some from Sgt. Peppers.  As I gazed upon this painting, all of the sudden inside my head there was the music of George Harrison playing.  The song playing was “While My Guitar Gently Weeps”!  It was just freaky crazy, my friend!

Down the street and around the corner there were two galleries that were full of bronze sculptures.  The first gallery, The Bennet Gallery, was all the works of the twin Bennet brothers and some of their children’s work.  It was very fascinating to look at all the various pieces on display.  Again, talking to the curator/manager/owner of this gallery, and answering the repeated question as to which one of us was an artist, led to a very pleasant surprise! After talking to this lady for quite sometime, she revealed that one of the twin brothers was her late husband and that her daughter was also one of the producers of these bronze images!

Later in the afternoon we entered another gallery featuring more bronze sculptures.  The lady in charge took us around and explained many of the show pieces on display.  She fired up a video showing the artist at work with his models, etc.  She seemed very knowledgable.  And  after answering “the question of the day” once again, she and Jason connected, as he did with every single person that we talked with on Saturday.  So as the conversation led itself to the question, Jason asked her how she knew so much about the artist and his works.  She confessed that the reason that she knew so much about the artist was that it was her father!

We actually visited 13 of the 70-plus art galleries in Carmel on Saturday.

As the sun was getting low on the horizon, our feet and legs were getting tired, this 66 year old body was starting to feel fatigued, as we were walking back to the car I peered though the glass at one last shop.  It sparked my interest and in turn I got Jason’s attention.  I said to him let’s go into just one more.  He looked at me sort of incredulously, like he couldn’t believe that I was really interested in going into another art gallery!  I repeated what I said and he concurred.

The quality of the paintings were unbelievable.  The attention to detail was second to none.  It was so meticulous that it appeared photographic like in detail!  I learned that this artist was an engineer by trade.  He had worked in the auto industry designing automotive stuff.  His education, training, and background definitely came through in his attention to automotive detail, as well as aviation detail!

There was a painting of Michael Schumaker in his Ferrari, Mario Andretti in Formula 5000 car, Jim Clark in the Lotus that he brought to the Indy 500 in 1963, Ayrton Senna in his McLaren, a two ship of F-14 Tomcats orbiting over the USS Arizona in Pearl Harbor with the point of view from a third aircraft in the formation, as well as many more fantastic paintings too many to mention!

Once again the gallery person was eager to engage both of us in conversation.  She was eager to explain the art work, give us background about the artist and answer our questions.  Once I got my fill of this gallery it was time to find Jay’s car and head over to the beach for a few minutes before we pack up and return to the valley.

The navigator, aka My Latent Tie Dye Hippie and All Around Edgy Dude, got us over to the beach just south of Pebble Beach Gold Club to check out the Pacific Ocean, the dropping sun, and the sandy beach.  It was a beautiful ending to a really fun day in this magical Central California Coast town!

Now for the 2 1/2 hour drive back to Fresno.  Jason and I talked about many things and that made the time go by very fast.

However, once we got back to his apartment and I began to unwind, I knew it was time for this old man to hit the rack.  As I slipped into bed and was laying there waiting to fall asleep, there were many thoughts that ran through my brain.

I thought about some of the things that I did with my dad in his later years.  I thought about bringing my parents to NYC for their first time and giving them “the grand tour of NYC”, which included taking them to Broadway for a show.  I thought about the only time that my dad ever went flying with me.  There were many more thoughts and memories of my dad that flashed through my brain before I fell asleep.

Those memories are priceless and aren’t for sale!

I wonder someday, when Jason reaches my age, if he will look back on our “day trip to Carmel”, or our other day trips, or maybe his trip out to Honolulu with me flying the B-767 with the same fond memories?  I surely hope so.

TIL NEXT TIME MY FRIEND, ROGER, WILCO, OVER AND OUT!