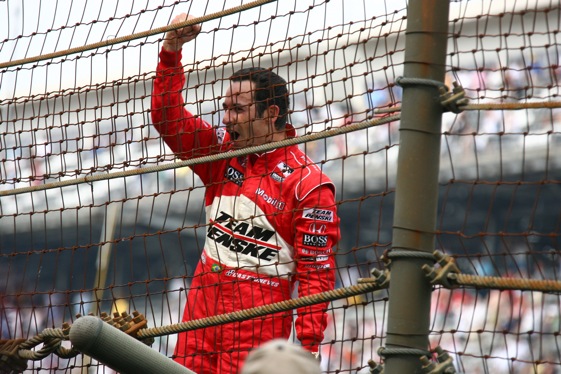 “Fairy tales can come true, they can happen to you, when you are young at heart.”  These are the lyrics at the beginning of the song, “Young at Heart”.  Sunday at the Indianapolis Motor Speedway the world was witness to those very words as the race played out for millions to see.

Just one month ago, Helio Castroneves, his sister Katiucia, and his agent Alan Miller were sitting in a Miami court room standing accused of tax fraud and defending themselves.  The life of the “Dancing with Stars” winner from last year appeared to be spiralling downward and out of his control.  For the entire 2008 off season, Castroneves was deeply involved in putting a defense together for the case of his life!

Only a couple of days before the start of the 2009 IRL season began did Castroneves receive the great news that they all were exonerated of most of the charges.  The remaining charges were dropped in the following days.

The story continues to unfold.  Castroneves comes to Indianapolis and is one of the fastest drivers in the days of practice leading up to the first weekend of qualifying.  When the sunsets on the first day of qualifying, it is Helio Castroneves that sits on the pole of the 100th running of the 2009 Indy 500!

On May 24th when the green flag drops, Helio Castroneves applies the loud pedal to his Dallara and steams into turn one in the lead.  He led the first 7 laps, then quietly slips back to run the next 135 laps hanging around the top 10.

For Roger Penske, this win is his 15th as a car owner, a new record for the Indainapolis 500.  Penske has employed such notable drivers as, Bobby Unser, Al Unser, Sr, Al Unser, Jr., Danny Sullivan, former Formula 1 champion Emerson Fittipaldi, and last, but definitely not least, the four time Indy 500 winner Rick Mears!

So today if someone were to walk up to Mr. Castroneves and ask him if he believes if fairy tales can come true, this reporter wholeheartedly believes that his answer would be a very loud and emotional YES!!!!